Caught the bus to downtown Brooklyn the other night. 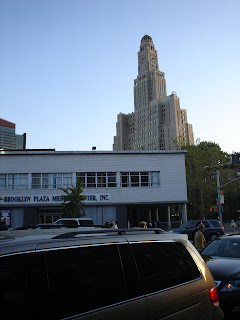 As ‘lost’ Australians we sat up front, and everyone included us in the lively conversation. An Italian-looking guy got on with a bottle of wine in a brown paper bag and asked the driver a question, and as she answered, tapped her affectionately on the shoulder as he went up to take his seat. I asked Kate if she saw it.

The woman opposite us told us she liked Australians. She had some over to her congregation and they were very polite. I told her I thought Americans were polite and the conversation up front became even more appreciative. An older crankier lady got on and complained when someone stood on her feet.

The woman opposite us told her, “Yo’ sitting in the hot seat. I got my foot trodden on there, so I moved.” The old lady, crankier, said, “Well yo’ feet very important to you.” To which our friend opposite agreed, “Aint nobody standing on them bu’ choo.”

The Italian-looking guy with the wine in a paper bag came up front to get off and said he would’ve brought glasses if he’d known there was going to be a party upfront. Then it was our time to get off. I saw that we were meant to leave by the back exit, but the driver said, “Oh, come this way; I want to say goodbye to you.” When we got off and our friend opposite said she’d show us where to go, but then when we said we wanted to go to Fulton Mall, she said, “Oh you got off at the wrong Fulton Mall. I’ll show you where to go. My daughter lives up there.” She came with us to South Oxford Street, and pointed us in the right direction. We introduced ourselves and Kate kissed her. We’re experiencing immediate rapports with people here.

We spent the evening at American Opera Projects and I was intrigued by some remarks made by Daniel Felsenfeld, the composer of a monodrama: Nora in the Great Outdoors. This work, with a libretto by Will Eno, is based on the moments after Nora has left Torvald’s ‘doll’s house’. The composer said how he loved how Ibsen could save revelations until the very last moment, but that he, Felsenfeld, was always intrigued by what happened after. I thought there was something really key in this which I’ll partially put into my own words; perhaps opera pushes drama past the classic Greek stages of crisis-climax-resolution to another step: reflection. This, said Felsenfeld, is the moment where characters sing.

It was late when we came out of the performance, so we couldn’t catch the bus back. But I was amused crossing Java Street, when a car turned behind us, with Chita Rivera singing loudly, “I like the island Manhattan/Smoke on your pipe and put that in…”