We’ve been down to Olvera Street in Downtown many times. Historically, it’s important as the site of the original Los Angeles pueblo. The oldest house in the city is there – the Avila Adobe (1818).

But recently we noticed a make-shift sign next to a doorway. It pointed out that thousands of people pass this spot every day without realizing that this is where Charlie Chaplin reunited with Jackie Coogan at the end of Chaplin’s ‘silent’ film, The Kid (1921). 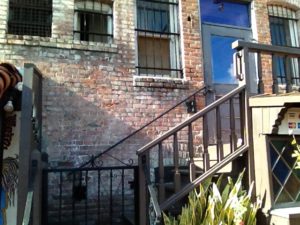 Watch The Kid from about the 2’30” mark of this extract and you’ll see the buildings behind Chaplin as he hugs his kid on the back of the vehicle that was just about to take him to the orphanage. Then Chaplin chases the orphanage worker, now on foot, up the street. I do a double-take when I realize that Olvera Street was dirt road as recently as 1921.

But go back to that amazing scene: in his attic abode, The Tramp breaks free of the orphan workers and goes up onto the roofs(!) trying to head off the orphanage vehicle abducting his boy. He slips and slides on the shingles, dodges the policeman, and jumps down several levels to land on the back of the van. Did early audiences laugh? The pace is hilarious. But Chaplin’s music is in quite some contrast.

I think I read somewhere that German orchestral composer Arnold Schoenberg loved Chaplin’s films but told Chaplin that his music was awful. (Chaplin had wedded music to film before making ‘talking’ films.)

I dare say Schoenberg was referring to Chaplin’s heart-on-the-sleeve emotionalism. Chaplin’s music here is almost Tchaikovsky at his most pathetique (even down to the baleful trombone responses). But the overall effect of image and sound combined is sophisticated. There is certainly a marked contrast in the relative pace of sound and image, and we’re obviously meant to laugh – and cry – at this sequence. It’s yet another example of the wonderful alchemy that results from combining music and action.